Crowdfunding WIN! Or How to Raise 65% of Funds in a Day 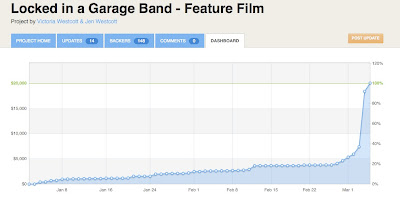 Wow. Can you believe that graph?!

If you missed it, Friday March 4th was a pretty cool day in the life of Locked in a Garage Band. Our kickstarter campaign ended at 9:54pm and we just managed to raise the $20 000 needed with 2 minutes to spare. Kickstarter is an "all or nothing" platform, so if we didn't raise what we asked for, no money would have changed hands. The fact that we raised 65% on the final day is huge, and for those of you on twitter on the day, you could see the pledges coming in from around the world.

Just a week ago, I had an experience of a lifetime in attending Elton John's Academy Awards Viewing party. Friday night beat that.

Not to say the party wasn't everything I thought it would be. It was. And more. But having hundreds (maybe even thousands?) of people around the world tweeting about our movie, making pledges and increasing their pledges was absolutely incredible.

It was the best day of my life.

So how did it start?

I woke up at 7:30am to a tweet from @LordBronco in Portland telling me to get up & start tweeting. We had both participated in @LMcNelly's epic kickstarter win (in which he raised $7000 on the final day of his campaign "A Year Without Rent", also mostly through twitter), so I trusted Lord's advice. I've never met him in person, nor have I ever met Lucas McNelly - but I just knew I should listen to him.

Throughout the day, Lord Bronco gave me tips that I followed. He told me to tell stories about the cast & crew, to give some insights into the movie and the shooting of our teaser/trailer. I took it one step further and told stories about my sister & me and how we grew up on a farm outside of Ottawa. I tried to be funny, I tried to type fast, and I tried to be honest. My sister took over for about 30 minutes while I took a much needed break to purchase wine, and while I was gone she told funny stories about me. Some were true, and some weren't. She's a screenwriter after all.

I was told to be careful not to tweet more than 350 times in an hour, which I laughed at. How could anyone tweet 5-6 times/minute? But I remembered that Lucas got kicked out of twitter in the final hours of his kickstarter campaign, so I tried to be careful.

There were moments when we thought we wouldn't make it.

There were moments when we thought we were losing our minds.

At one point, I offered to name my first born after the next backer and 2 people backed us at about the same time - Dom Zook and Vanda. That was funny. So funny that I had tears streaming down my face at the twitter discussion I was having with complete strangers around the world. I think Vanda's in Prague, and Dom Zook is in LA.

We loved the comments from people pouring in to encourage us to keep tweeting. In the last hour, I think my entire twitter stream was about our movie. Whatever else people had been tweeting about was silenced in my world.

In the last few minutes I was eventually kicked out of twitter. We raised the money at 9:52. I had just enough time to tweet "APPLAUSE!" and twitter booted me out. What timing!

Today, a journalist from ATV called me to do an interview about the incredible last minute success of our kickstarter campaign. Another journalist from Douglas Magazine set up an interview with me for Wednesday afternoon. You know what's awesome about all that? I'm not having to come up with great press releases! The media is calling us! YEAH! That's the way we like it. Any indie filmmaker will tell you that.

When we researched how others were successful with kickstarter, we found blog posts that really helped us. So I'm hoping to write a post that tells you a bit more about how we worked on the campaign and what worked for us.


"Have you heard about indi-go-go? You get to keep whatever you raise even if you don't get the full amount!"

"Oh yeah? Interesting. I'll have to check it out. Thanks for the tip, but we like the 'go big or go home' approach and we think we'll get it,"

What I was really thinking was

"Uh yeah we've heard of indi-go-go! Of course we have. We've done our research! And we chose kickstarter because we want more than a couple of grand! AND WE'LL GET IT! Someone else raised $100,000 for their feature film. We can raise $20 000. I used to go door to door for Greenpeace. Now we have the internet! Just you watch. We'll show you."

See why I didn't actually say what I was thinking?

A whole lot of people will offer advice. Some of it you'll listen to, and some of it will cause you to cringe. Sometimes you'll wonder what the hell you were thinking when you clicked "sign up." But if you believe in your project, and you're able to put your life (and pride) aside for a month or more, then you're good to go.

Anyway, more to come on my thoughts on crowdfunding. If you have any questions now, please let me know in the comments section! This really is an incredible filmmaking community and I'm happy to share my experience with anyone who asks.
Posted by Victoria at 8:21 PM

Missed the Kickstarter Campaign? We still need your support!